I finally arrived in Addis on Monday morning after a 13-hour flight wearing the same clothes I had worn from home on Friday! Yikes. I’d been planning how I could clean up and change clothes in a bathroom (I tried to channel Mr. Bean changing from his suit into a bathing suit on a public beach–you must see it if you haven’t). 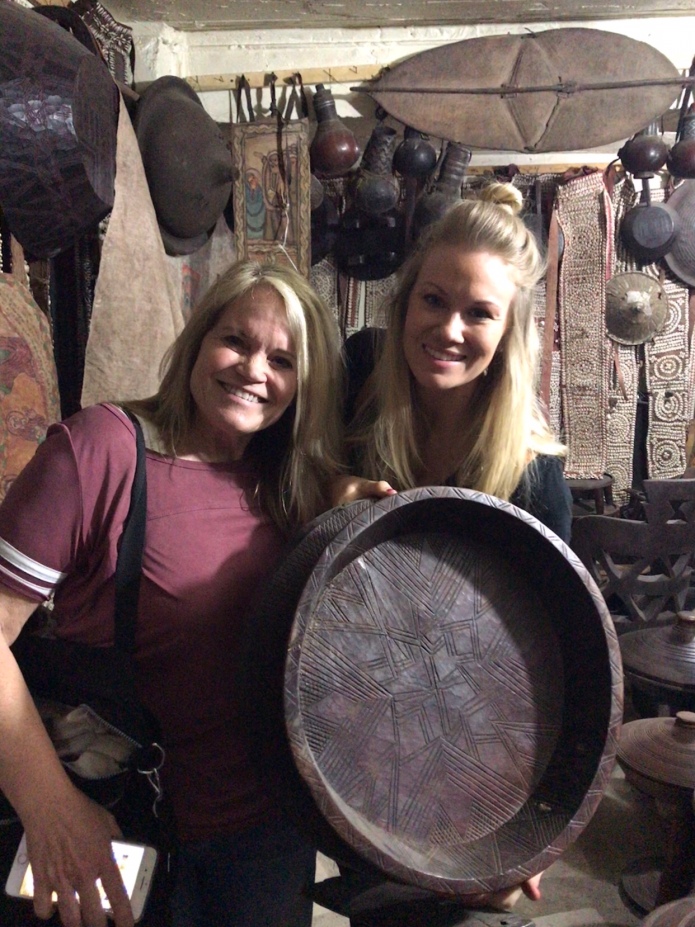 I’m lucky to be traveling with Diana Bingham, Director of Eastern Africa for Engage Now Africa, and her daughter Bree. They picked me up from the airport and we headed to Diana’s favorite stop for shopping. Believe me when I say it didn’t look like much from the outside. We couldn’t tell whether we’d arrived at a construction zone or a demolition project.

Once we entered however, I got dizzy with excitement. I would look at one thing and glance somewhere else and get distracted. I decided to focus on just the scarves. Last Christmas I wished for a holiday scarf–something bright and red. So I selected several that would do the trick.

About this time I realized there were MORE rooms! Diana calmed me down, assuring me we could spend as much time as I wanted. The next room we entered had an abundance of wooden objects that the proprietor gathers from the tribe, about 100 miles from Addis. Some were antiques! I commenced playing a game with the owner because I was curious about each object’s intended purpose.

I started with the object below. I love using wooden items to serve food. Diana and I thought this could hold crackers to serve on a cheeseboard. The owner asked me what I thought it was. I had no idea and was shocked when he told me it’s a pillow! WHAT?!? Crazy. Although it’d be interesting to initiate a study of neck ailments among Ethiopians versus Americans. Maybe they’re onto something.

The next item I noticed would be a perfect bread board for a round loaf of bread. Again, my guesses were too conventional and WAY off. These rounds of wood are birthing blocks. Again: WHAT?!? How are these helpful in the birthing process? I intend to track down some more information on childbirth in the villages. I’ll get back with you. Needless to say, I wasn’t tempted to get one to serve bread.

Then I spotted some rectangular pieces of wood with remnants of faded letters from the ge’ez alphabet. They were various sizes but clearly used to write on so I guessed they were for signage. In fact, these were used like individual chalkboards for children to learn how to write the Ethiopian alphabet. A weed is used to write on the board and letters are removed with SALIVA. Their own saliva. By licking the board. Please know I did not learn that last part until I had purchased one. So I’ll be dipping mine in a Clorox bath before using it for food. Or probably just hang it on a wall.

I turned my attention to charming wooden trays with feet or legs attached. Some were primitive and others were adorned with decoration. I simply guessed they were serving trays. The owner urged me to think about my response. Who invented COFFEE? The Ethiopians! These are the ORIGINAL COFFEE TABLES! I couldn’t believe the answer was so obvious but never crossed my mind. 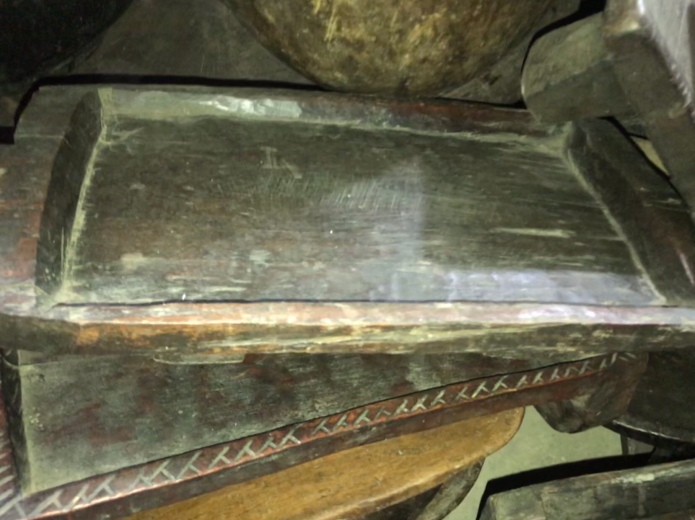 Maybe this was the most enlightening shopping experience ever! We headed to Kuriftu, a lodge perched next to a lake. I indulged in a massage—which really wasn’t an indulgence because you receive a complimentary massage with your stay. I melted into bed, and fell asleep listening to my favorite night music: rain.