Descending to one of the churches

An Ethiopian mother watched with fascination as a swarm of bees surrounded her infant in the 12th century, AD.  The bees inflicted no harm on the boy.  She interpreted this event as a sign that her son would be Emperor of Ethiopia and named him Lalibela, “the bees recognize his sovereignty.”  He did, in fact, become the King of Ethiopia and reigned for 40 years! 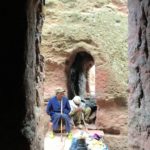 Shoes must be removed before entering 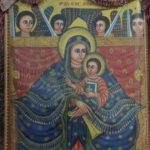 A Madonna and Child inside one of the churches

The pastoral area around the churches

King Lalibela reigned during the time Jerusalem had been captured by Muslims.  Thus, Christians were unable to make pilgrimages to the Holy City.  King Lalibela saw a vision of Jerusalem and determined to build a New Jerusalem to serve as his capital and a destination of spiritual significance for pilgrims.  It is not known how many of the churches were completed in his lifetime, but Lalibela served as the capital of Ethiopia from the late 12th century into the 13th century.

The churches were carved through an opening which became a window.  Then the interior of the church would be carved, and lastly, the exterior was exposed.  Every single detail on the church has religious significance.  There are, for example, three windows representing Christ on the cross between two thieves. Often the three windows represent the trinity.  There are windows in the shape of a monk’s hood and numerous windows in the shape of a cross–the Roman cross, the Maltese cross, the Grecian cross.  I didn’t realize how many different crosses exist.  Each of the significant churches in Ethiopia have a unique, richly embellished cross!

Each of the churches are unique–some are diminutive, several share a wall, some have a baptismal pool outside the church.  But the “Church of Saint George” is breathtaking.  The approach to the church affords a beautiful vista of the countryside. Then, from a distance, you recognize the top of the church shaped in the form of a cross.  The rosy hued limestone is highlighted with chartreuse lichen that makes a lasting impression.  It is a monument of enduring beauty that is a testament of the Ethiopians’ love of God.

A narrow passageway between churches 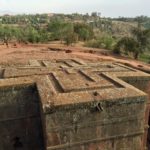 The Church of Saint George from above

The Church of St George

I wonder what monuments will endure from our century.  I’m afraid they may be strip malls and prisons.  I am inspired by the dedication and sacrifice of generations past that live on–if not in stone, perhaps in lives well lived.