Another travel day.  I left from Albi while it was still dark.  I’d grown accustomed to the rolling river valleys of central France that are thickly forested.  The landscape morphed through the day until I was gazing upon quintessential Provencal views: vineyards, massive rocky outcroppings, and scrubbier trees–oak and cedar.  When I stepped onto the train platform of Salon de Provence, I felt like I was back in California.  I embraced the soothing Mediterranean warmth after the brisk chill of Paris, Normandy, and central France.

Salon de Provence is easily walkable–I walked with my bags to lodging in the center of town.  It’s a perfect home base to explore other areas of Provence.  Salon was an oppidum: a large fortified Iron Age Settlement.  Salon had a premier location along the salt trade route, hence its name (meaning salt). When Provence became part of the Holy Roman Empire, the archbishops of Arles controlled Salon.  Old town is dominated by the 9th century castle “Chateau de l’Emperi” and the clock tower.

The castle, built in the 9th century, was the largest in Provence during the 12th and 13th centuries and now houses a museum of military history.    Oh how I wished my father could be with me when I toured this museum!  On display is a massive collection of weapons from the Napoleonic wars to present-day , as well as original uniforms from the same time period.  My impressions?  I didn’t know there were battles fought on bicycles.  I didn’t know women had a significant role in the French military for centuries (as cooks).  And last but not least, I can’t believe the ornate embellishments upon French uniforms throughout history!  I couldn’t stop thinking of the time intensive labor involved in weaving the textiles and sewing the uniforms, let alone embellishing them with embroidery, brocade, buttons, etc.  And the headpieces–extravagant beyond belief!  And they most certainly would have been in the way.

I made the obligatory visit to the Marius Fabre soap factory, which has a museum tracing the history of soap making.  It seems to satisfy some primal instinct towards cleanliness, seeing fragrant soaps in every configuration–bars, flakes, liquids.  Getting the soap home is the challenge. 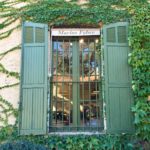 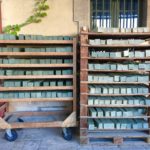