Puycelsi sits majestically upon a hill, high above the Vere river, surrounded by ancient forest.   Built on an outcropping of limestone rising 100 meters high, the name comes from a Celtic word meaning a “wooden fortress built on a hill”.  Benedictine monks built the stronghold during the 10th century.  It became known as an impregnable settlement, withstanding numerous attacks over the centuries.  At the last census the population was 463, although the village prospered at a population of nearly 2,000 during its history.  It is listed as one of the “Most Beautiful Villages in France.” 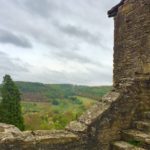 To visit Puycelsi is to step back time, as it has remained unspoiled.  It was a pleasure to walk  up and down the cobblestone streets admiring the historic architecture.  Each vantage point around the circumference  of the village affords a different view.  One side overlooked lush patchwork fields bordered with trees sporting fall colors, while another featured rock outcroppings and distant forest.  As I enjoyed the sweeping  panorama, I was startled by the sound of cowbells and looked over my shoulder because they sounded so close! The sound had floated from far below. 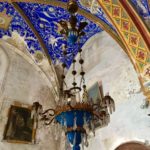 Puycelsi has a single church, Eglise Saint Corneille, built in the 14th century.  Your eyes are immediately drawn upward to the brilliant blue and gold ceiling, a stark contrast to the timeworn walls.  There is also a small chapel on the periphery of Puycelsi, “Chapelle St. Roch”, with a commanding view. 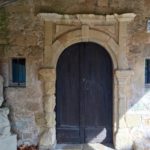 I spent two nights at Pirankhmide (15 kilometers from Puycelsi) with Rene and Mia, who embody the definition of gracious: “courteous, kind, and pleasant”.  Rene picked me up at the train station–my train was an hour and a half late–and when we arrived at their lovely home, Mia had homemade soup and bread waiting even though it was 9:30 p.m.!  AND, believe it or not, a heavenly concoction of chocolatey-nutella-speculos pudding. Talk about a home run.

If you’re considering getting married in France, this is your venue. The home will be 200 years old next year! I hope they have a bicentennial celebration of epic proportion.  The house overlooks a grove of ancient oak trees that drew me in to the tranquil space, where I could actually hear acorns falling.  Breakfast is usually outdoors overlooking the trees and saltwater pool.  Rene makes fruit salad to accompany Mia’s homemade yogurt and brown bread.  And the piece de resistance (“the most important or remarkable feature”) is that Mia gives reflexology and shiatsu treatments. So after my visit to Puycelsi, I had a massage.  My stay at Pirankhmide had every desirable element of a perfect excursion.