Getting to Barahona from the Santo Domingo airport turned into a raucous dance party. Our driver, Jairo, and his wife Julia were most accommodating when we asked for merengue music (merengue is the national dance/music of the Dominican Republic). Julia flipped through radio stations while Chanel and Summer busted out moves, limited only by their inability to stand up.

Or perhaps a fish fry?

Adding to the carnival atmosphere were vendors approaching us while we were stuck in Santo Domingo traffic. First we purchased a savory, deep fried snack. And THEN, big, buttery cashews that were addictive. We had to buy more. Most curious were the vendors peddling windshield wipers. Really?  There’s a large market share of buyers purchasing windshield wipers on the way home?

The dance party was kicked up a notch when Jairo purchased  a CD featuring “Omega!” to satisfy our merengue craving. Do yourself a favor and see if you can listen to Omega on Pandora. Or better yet, mention “Omega” to a Dominican and their eyebrows will raise with delight and they’ll repeat “OMEGA!” and everyone will laugh knowingly. This has already happened numerous times on our short stay. 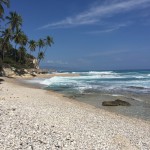 Cooling off in the “pool”

View from a hammock

Barahona isn’t frequented by most tourists, but those who visit won’t want to leave. We arrived at Casa del Mar Lodge to breathtaking vistas of a rocky ocean. We had variations on that theme while brushing our teeth, eating breakfast on the veranda, in the pool, from the hot tub, from the hammock, from the restaurant–there’s a spectacular ocean view everywhere! No wonder we chose to spend two entire days soaking up the serene atmosphere.

And the beach is so accessible! Chanel and Summer ran on the beach. I power walked. Well, really it was more of a walk. A stroll, I guess, rewarded with a pile of sea glass!  There was a protected pool formed by rocks that was perfect when we needed to cool down. 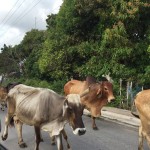 Cows frequented the road as often as cars!

On Thursday, Jairo took us to Bahia de las Aguilas in Jaragua National Park. We stopped for amazing ocean views high above the water before descending to the beach. The landscape is otherworldly: dry scrub brush, volcanic rock, and cactus.  The beach is dreamy: six miles of white sand and the palest blue crystalline water. The water is so calm we could float on our backs! 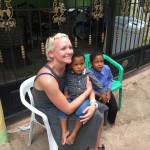 Before we returned to the lodge, Jairo took us to meet his family–his four sons, parents, uncle, a nephew.  What a highlight it was to spend some time with them while his father played the guitar.

There’s really nothing to mention about our last day at Casa del Mar. Unless you want to hear about a splendid massage in a treehouse, lazing by the pool, reading, playing cards into the wee hours. Why would I mention that? 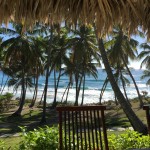 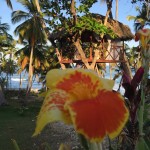 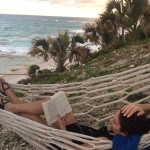