Reality doesn’t always exceed expectations, but Petra blew my mind. This day will always be emblazoned in my memory!

Moon above the slot canyon as we approached the Treasury

The Nabataeans probably built Petra as the capital of their kingdom in the 4th century B.C. Petra is approached by walking through a slot canyon about a kilometer in length. The geology is fascinating, and I was surprised when Wasfi, our tour guide, showed remnants of elaborate carvings in the walls. The narrow gorge was used by the Nabateans to harness rain water in an elaborate system of structures channeling the water into clay pipes. 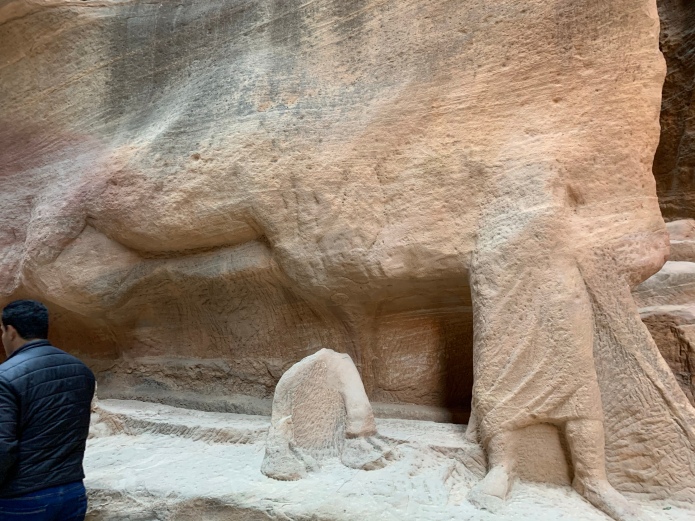 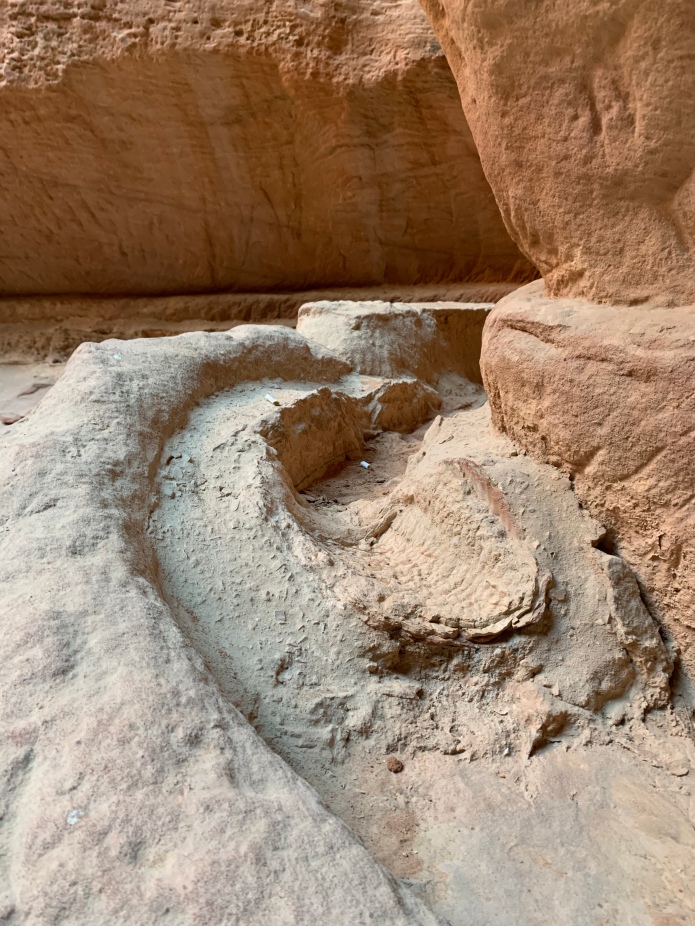 Suddenly we glimpsed the treasury. What a thrill! It’s imposing structure is remarkably intact. Carving the structure required great skill. The carvers would start at the top and work down, which allowed for no mistakes. You can see impressions to the side that would have held scaffolding. The urn has suffered damage because it’s been the target of many bullets. Hooligans had the misperception it contained treasure. We climbed opposite the Treasury to get a better view. 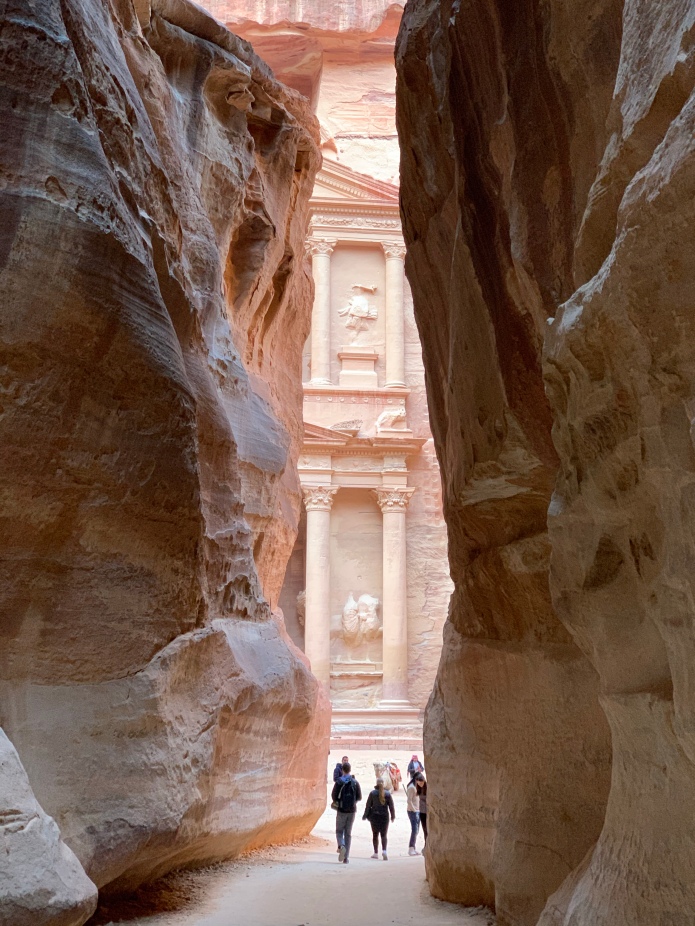 First glimpse of the Treasury! 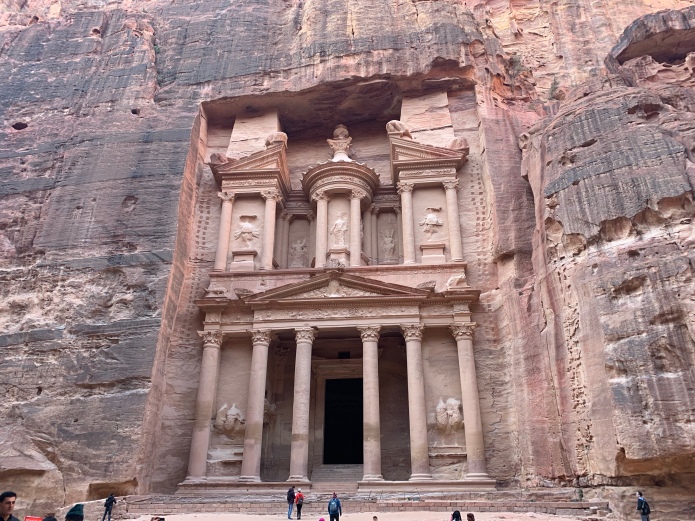 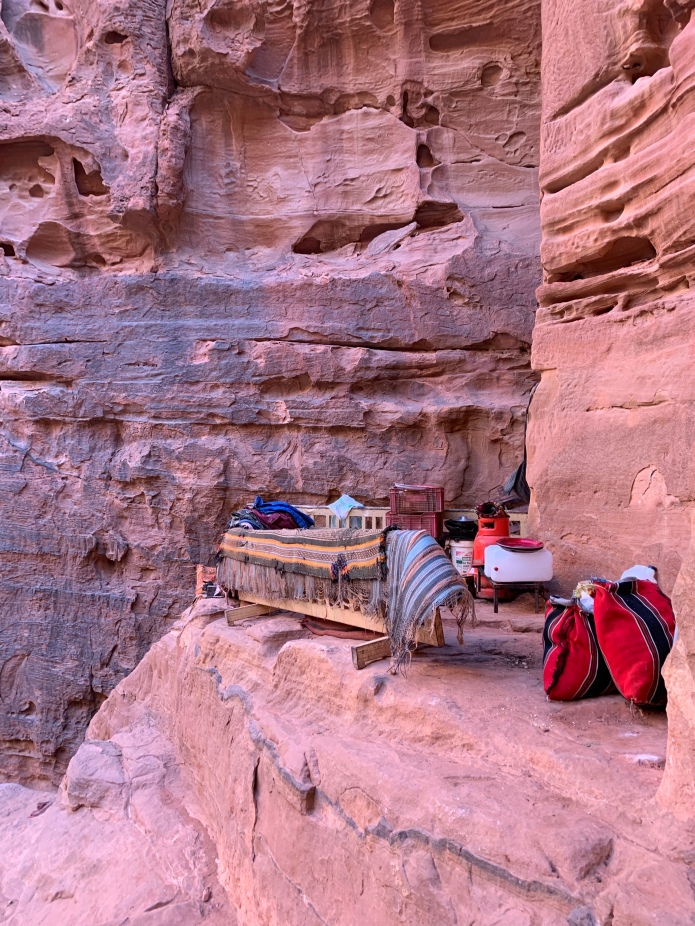 After gloating over the splendid view for a time, we resumed walking through Petra. I had no idea how many beautiful facades were carved in the rocks! And they were–to my surprise–tombs. I thought “Petra is basically a graveyard!” But my impression is too simplistic. The Nabateans would travel from nearby homes to transact business. The streets would have been filled with activity. And the King’s residence was here. 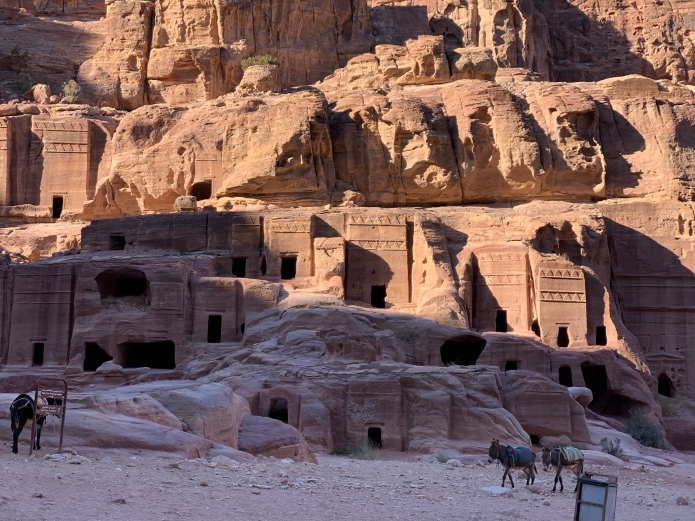 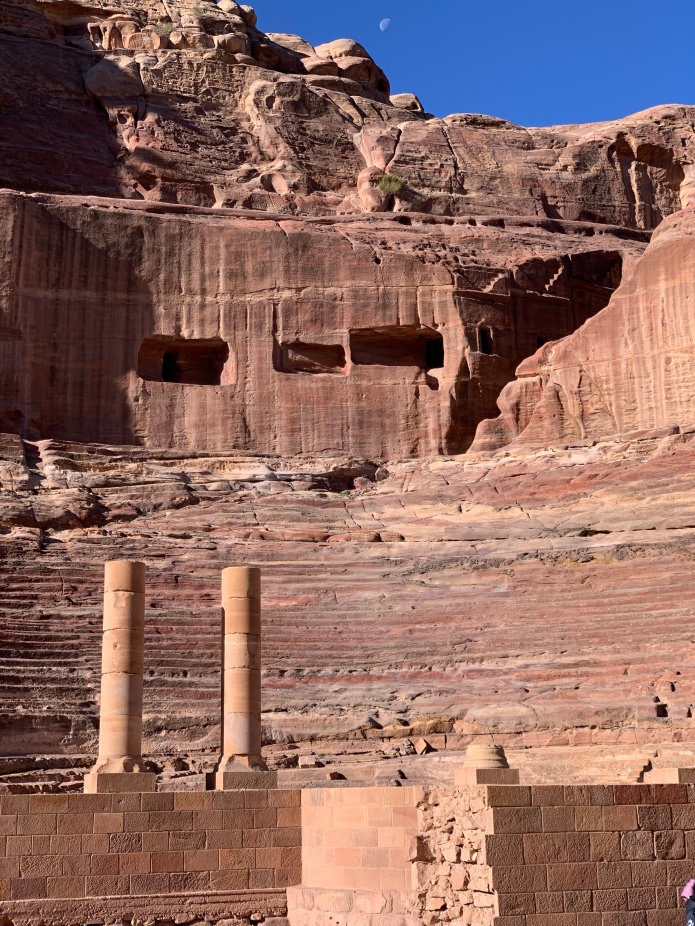 There are vendors all over Petra. We enjoyed several stops. One merchant sells frankincense and myrrh. Another demonstrated how to use the black kohl Bedouins use to line their eyes. We met the woman who wrote “I Married A Bedouin”. I bought a pair of earrings from her that have three bars and a circle. This pattern can be seen on buildings in Petra, including the Monastery. It’s used as a border and symbolizes birth, life, death, with the circle representing eternity.

When our tour guide, Wasfi, started prepping us for Petra he said it might be 8, 10, 12 kilometers. Then he started saying maybe 14, 16, 18 . . . I thought he was teasing us. He wasn’t. And the challenging climb to the monastery was last. We finally started the ascent: 800 steps! I’m not gonna lie, the climb was brutal–but the sense of accomplishment was stupendous.

I languorously relished a hummus sandwich until I felt like exploring the scenery opposite the monastery. There’s another short climb that has a stunning view of surrounding mountain ranges.

Mountains beyond the monastery

Now, if you lived in a perfect world, how would this day end?!? Why, with a Turkish Bath, of course. Can you believe it? The ritual begins with a shower and soaking in a bubbly jacuzzi. Then the steam room. When I left the steam room I was directed to a large marble slab. I wasn’t sure what to do, but hesitantly climbed on board and the attendant began scrubbing me vigorously with a lathered loofah. Then she poured buckets of hot water all over me. I’ve never realized how luxurious it feels to have water poured over your head and body. I moved by a basin where my hair was energetically washed, and again the delicious sensation of hot water streaming over my head. Lastly, a massage. I was reduced to putty. It was sensational. 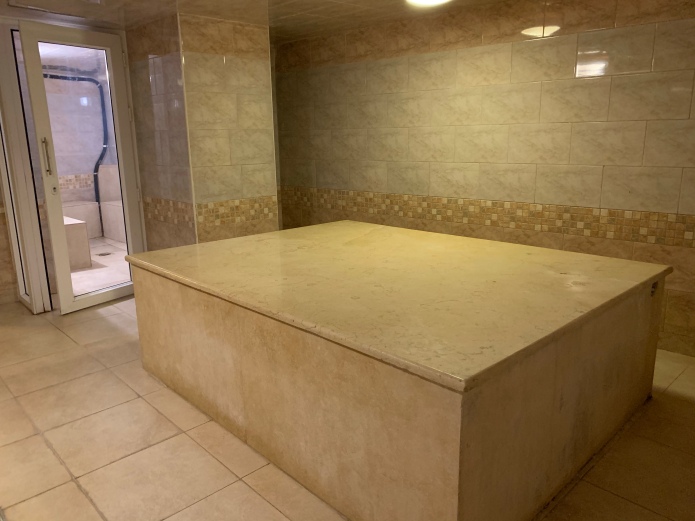 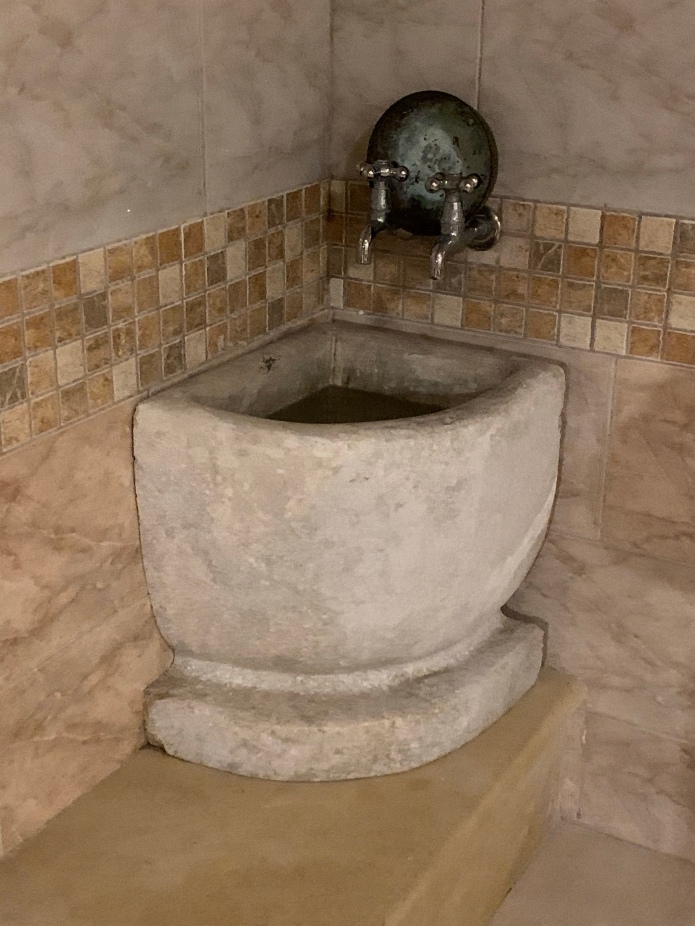 “Petra is a brilliant display of man’s artistry in turning barren rock into a majestic wonder.” –Edward Dawson

An enormous tomb that was later used as a church

Striated colors of ceiling from the rock bleeding over time 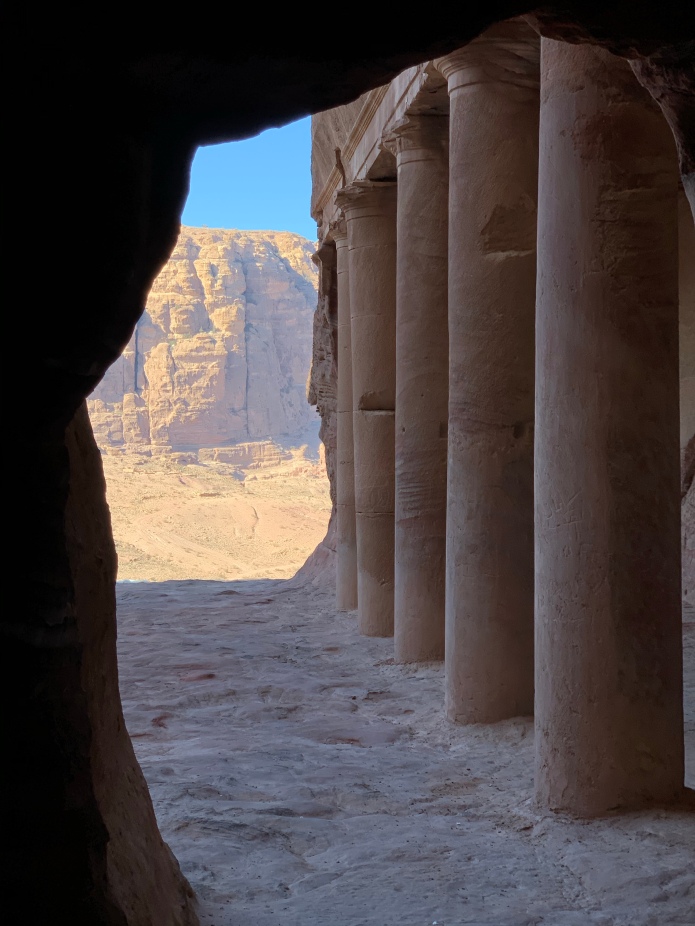