The Mother of all Mayan Ruins, February 2015

Today I went to another country: Guatamala. We traveled to Tikal, which had over 250,000 inhabitants at one time! It was mind boggling. In retrospect, Deb and I wondered how many miles we walked–we walked for hours. Yet only 15% of the ruins have been excavated!  Here are some highlights.

The first picture of ruins were residential areas for the upper class.  The bedroom would have been lavishly decorated. They were amazing craftsman.  The platform for the bed is in the foreground.  In the third picture, you can see the top of the temple above the jungle canopy.  The crest at the top, rather like a bell tower, designated it as a temple. The temples were painted red. The height of these temples is staggering.

One of Two Temples facing each other in the Grand Plaza

In the left foreground of the Grand Plaza you can see stone obelisks called stele, which is where they would post announcements. There are also stone discs for offering blood sacrifices. At the top of the temple is an opening where the high priest entered to commune with God and then reappeared to talk to the people. Limestone has remarkable acoustic abilities so the high priest could address the people and be heard.

The oldest pyramid was built about 900 BC. There are three smaller pyramids behind lined up so as to cast a shadow pointing directly to this pyramid at each solstice. They were remarkable mathematicians. 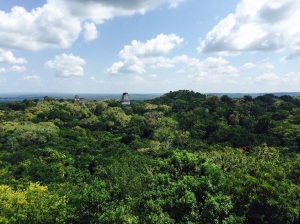 This is taken from the last pyramid built 741AD. The people disappeared around 800 AD. We are on top of the world-230 feet high! Look carefully and you can see peaks of other temples poking above the jungle.

This evening we took our tour guide and his wife to dinner. Lovely people. She teaches school. In his free time, Mario is working with the Audabon Society to catalog birds of Belize–there are about 225 varieties.
And guess what else? The Banana Bank Lodge has a pet jaguar, a mean pet monkey, and raucous birds caged near our dwelling! No need for an alarm clock!

Deb on Top of the World